The following scenario occured during filming for THE NOMAD, the first short film in our OF SOULS+WATER video series. While NRS ambassador Erik Boomer dropped a 78-foot waterfall, a group of paddlers, including fellow NRS ambassador Sam Drevo, used kayaking safety techniques below. Here, Sam explains how a series of smart choices and quick thinking saved the day when a successful run suddenly turned scary.

Some people will never feel that dropping over a 78-foot waterfall is a good decision, but after a 3-hour drive and some serious planning, Erik Boomer did. And really, planning for all outcomes is what makes the difference between a good decision and a bad one.

After his Ellesmere Island Expedition presentation in Portland, OR, Boomer asked us to provide rescue support for a production shoot at Sahalie Falls. The Forge Motion Pictures crew would be shooting, and he was looking for a solid safety crew. Sahalie is an easily accessed waterfall on the headwaters of the Mckenzie River in Oregon. First run by Shannon Carrol in 1998, this incredibly beautiful waterfall has seen a relatively small number of descents by expert paddlers in the last few years.

With a rolling lip, aerated pool, and calm staging eddy, Sahalie at first appears to be the perfect waterfall for those looking to go large. Closer inspection, however, reveals a stout Class V mini gorge immediately below the base of the falls. With only a couple hundred feet of Class II separating the two, the danger of washing into the mini gorge unconscious, or with, say, a broken paddle is a very real risk as Boomer found out. 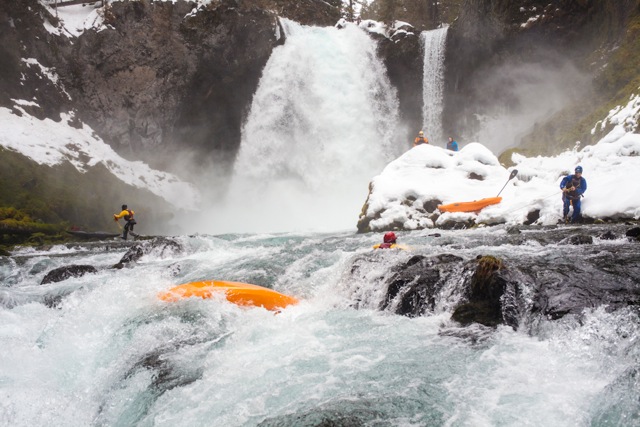 After watching him fade into the mist about two-thirds of the way down, our next view of Boomer was of him resurfacing in a massive backloop-to-airscrew combo. It was an impressively stylish landing by any standard, especially when he landed upright. Things seemed to be going great; Boomer was upright, conscious, and injury free. The would-be-rescuers breathed a sigh of relief, but just a moment too soon. In the same instant, Boomer began stroking towards shore, but his left blade flopped uselessly in the quickening current leading into the mini gorge below.

So begins the chain of decisions that resulted in Boomers shiny new Stomper getting raked over a sharp, shallow shoal dropping 10-15 feet, before bubbling over a stout 6-8 foot ledge and trashed in a hole, rather than Boomer himself.

1. Although Boomer cleaned his line on Sahalie the day before, he requested the support of a safety team for his second descent. With 3-4 feet of snow on the ground around the falls, the terrain was difficult to maneuver through.

2. The entire crew scouted the falls, discussed the line, and the potential outcomes of missing that line. We also took the time to scout the mini gorge below, which changed our plans significantly.

3. The safety crew reassigned different members to positions where they were most comfortable, eliminating nagging doubts that could cloud judgment when swift action was to be taken. These positions where swapped again at the base of the falls once we took stock of the equipment and human resources available. Last-minute tweaks to the original plan are a common occurrence when setting safety in class V.

4. The live-bait team and river-right throw-bagger opted not to throw lines to Boomer, as he was not ready to receive a rope, and because adding a swimmer (tethered) to the situation would only increase the risk to the rescue crew. 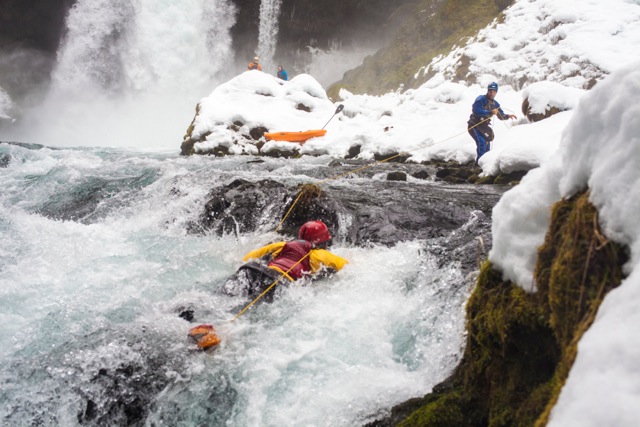 5. The river-left throw-bagger, waited until Boomer was ready to receive the rope. He began a dynamic belay to improve his footing in the snowy conditions and lessen the force being applied at both ends of the rope.

6. Once Boomer received the rope, he flipped and immediately pulled his skirt, choosing to further reduce his chances of losing his grip and increasing his chance of a self-rescue (it is difficult to direct a boat and paddler into shore with a rope). The entire time he lessened the force applied to the rescue rope.

Once Boomer was back on dry ground, he took off in pursuit of his boat. It didnt make it very far; it was only a few hundred feet downstream getting munched on by the horrendous ledge hole that marks the end of the mini gorge. After retrieving the boat, we grouped up for high fives and a discussion of the successful descent and rescue. 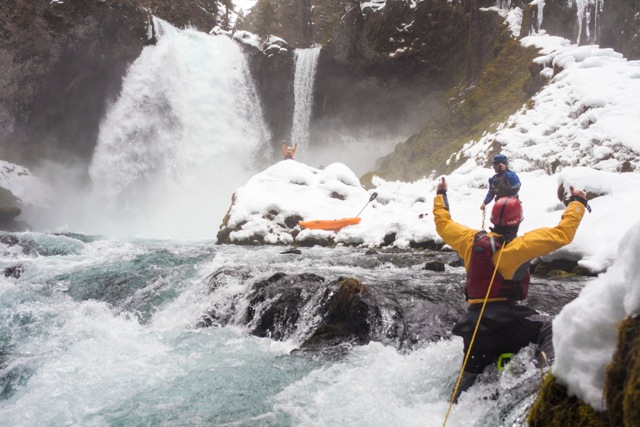