Todd looks at what's under the tire of his
3/4-ton Chevy, "Mint Julep".

Float bags are a necessary accessory for kayakers. They serve to displace water that enters and to keep your valuable craft afloat while you recover and pump or dump the water out. Boaters who have small kayaks with foam pillars sometimes think they don’t need additional flotation. Each gallon of water weighs over 8 lbs.; minimizing the amount of water in the boat lets it float higher. There’s really no substitute for flotation bags.

Walter Harvest, from California, built some of the first fiberglass kayaks in the United States. The need for flotation soon became evident, and he worked with a swimming pool liner manufacturer to build the first vinyl (PVC) float bags. After a few years there were a number of manufacturers. The bags forced a tradeoff; if made thick enough to withstand punishment, they were quite heavy. Still, they were the standard until Voyageur and NRS started using urethane-coated material in the 1980s. Although sometimes subject to delamination, the material’s lightness and stronger seams were major advantages.

The bag was fully inflated when Todd ran
over it - no leaks, no problems!

Today, urethane-coated nylon fabrics are a commonly used material in float bags. With this material, getting a consistent bond between the urethane coating and the nylon base fabric has always been the tricky part and where most bag failure has occurred. Less expensive, price-point bags are made with vinyl-coated fabric. However, vinyl welds don’t have the strength of urethane welds.

At NRS we are always striving to be the industry leader, and our Infinity Flotation is a perfect example. We’re making these bags out of 10-gauge 100% ThermoPlastic Urethane (TPU), with a special finish to make them extra tough. It cannot delaminate because it’s not a laminated material, and it welds with seams that just won’t leak. The material is very light in weight, and the bags are PVC-free even down to the inflation tube. And since there’s no fabric in the material, they do a better job of conforming to the shape of the kayak or canoe and therefore displace more of the water.

Pinched, stretched, punished,
but not harmed.

So, the kayak float bag has evolved from the old jury-rigged inner tube or pool toy to the latest high tech material and manufacturing processes. The Infinity floats are totally tough, won’t leak and are PVC-free. That’s a bunch of reasons to like them.

Here’s one more – we’re so confident about them that they’re guaranteed for life to the original purchaser. There are many things to think about when you’re on the water. We believe the integrity of your float bags should not be one of them. 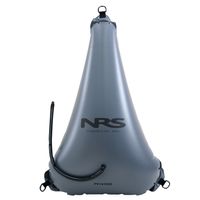