How to Identify Your Boat 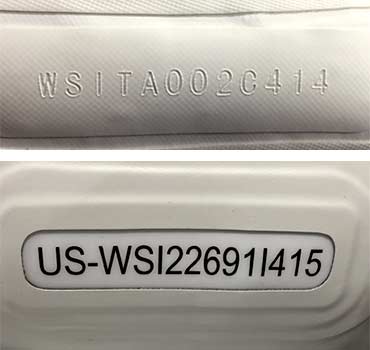 Since November 1, 1972, federal law requires all boats, including inflatables like rafts, IKs and SUP boards, manufactured in, or imported into, the US to have a unique 12-character identifier called the Hull Identification Number (HIN). This is often referred to as the “boat serial number” or “boat ID number”. The number is usually found in the stern and can be engraved on a plate or stamped into the boat material.

For boats built or imported after August 1, 1984

Entering the MIC into this US Coast Guard database will get you the manufacturer and their location.

These five characters are assigned by the manufacturer. They are normally numbers, but letters (except I, O and Q) may also be used.

The letter is for the month of manufacture:

The number is the last digit of the year of manufacture. Since there’s only one digit, it must be interpreted by the Model Year. In our example, J3 designates that the boat was built in October 2013.

Note: Cataraft tubes are not considered to be a boat, until they are married with a frame. An abbreviated HIN of 4-5 numbers, followed by a letter denoting month of manufacture, and three numbers representing the year of manufacture and model year, as described above, may be attached to the tubes. Example: 1234(5)E516, would have been made in May 2015.

Note: This was the first attempt to create the HIN… and parts of it are a bit confusing.

Manufacturer Identification Code (MIC) and Hull Serial Number are the same as described above.

Here’s where it gets confusing. Manufacturers were given the option of giving either the date of manufacture, or the model year.

HIN with Date of Manufacture

Example: ABC12345M72D (November 1972) The 9th character “M” stands for model year. The 10th and 11th are the last two digits of the model year. The 12th is the letter designating the month of manufacture.

Now, here’s where the government got cute: