Your language guide to the boating world. By Mike McCrea

Reprint of a Canoe & Kayak Magazine article, used with permission. 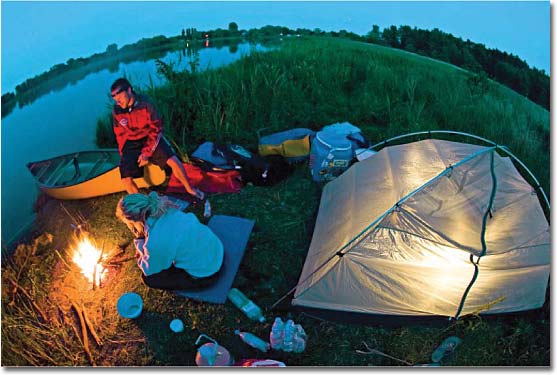 Air brace - An ineffectual brace in which the paddle blade is waggled above the water until the boat capsizes.

Attain - Paddling upstream against a current. What you do when you inadvertently float past the takeout.

Baja sleigh ride - When a kayak fisherman hooks into a fish big enough to pull him and his kayak in circles; also Texas sleigh ride, Gulf Coast sleigh ride, etc.

Beatdown - What ensues after you miss your boof and drop into a hole.

Bony - aka scratchy. Shallow water that scrapes up your boat. The blue and green coating on the barely submerged rocks isn’t algae, it’s vinyl.

Boof - To propel a kayak over a rock or ledge. Onomatopoetic. In a canoe, however, it’s when the yoke snaps mid-portage and the boat lands on your head—also onomatopoetic.

Booties - Neoprene socks worn on your feet. Also make your car trunk smell like something died.

Brace - A paddling stroke used to keep the boat from capsizing. If you’re unfamiliar with this stroke, see carnage and yard sale.

Broach - What happens when someone hits a rock and turns sideways. It’s important that other paddlers yell, “Don’t lean upstream!” in unison when a novice gets sideways on a rock. Leaning upstream may result in a capsize, carnage and yard sale.

Bus stop - Raft guide slang for dumping every client in your raft. Bus stop: everyone out except the driver.

Capsize - What happens when you lean upstream in a broach. See also cap size; what you’ll need to know to replace your hat when it floats away with the rest of your gear.

Carnage - A jovial term to describe what happens after you lean upstream in a broach.

Carp - A failed roll in which the boater manages to get his lips above water to take a hasty breath.

CFS - Cubic feet per second, referring to the volume of water flow at a certain point on the river. Not to be confused with CRS, an acronym for why you showed up at the put-in but forgot to bring your paddle or PFD.

Chine - The angle where the sides of the boat meet the bottom. Not to be confused with China, which is where all inexpensive rec kayaks will likely be made in a few years.

Creeking - Paddling (or simply bouncing down) small, high-gradient streams. Also known as steep creeking. Sometimes confused with creaking, which is the sound that a C-1 paddler’s knees make after a few years.

Draw stroke - A stroke performed by placing the paddle out in the water parallel to the boat and pulling the blade towards the hull. In a tandem canoe, having a bowman capable of executing one can prevent yelling and recrimination.

Drybag - A waterproof bag used for gear storage. Having a change of clothes in a dry bag is essential if your bowman can’t execute a draw stroke.

Eddy - A place in the river, often behind an obstruction or inside a sharp turn, where the water reverses and flows upstream. Eddies are a good place to pause, rest or boat scout. They are also the place where your gear is likely to collect after your bowman misses the draw stroke, your boat broaches and you forget to lean downstream.

Eddyline - The line between the eddy and the main current. Not to be confused with Eddie’s Line, which was, “My you look nice today, Mrs. Cleaver.”

Feather angle - Kayak paddle blades are positioned on different planes on the shaft, at an angle relative to one another (typically 30-60 degrees) to confuse novices and prevent wind resistance when swinging the blades forward.

Ferry - Angling the boat to move sideways or upstream against a current. A Hairy Ferry is a ferry with dire consequences if you screw up.

Foot entrapment - What happens when you attempt to stand up in fast-moving water. If you live, your ankles will bend in a whole new direction.

Groover - The latrine on a multi-day river trip. Name derives from the time when such devices were re-purposed ammunition cans that left a distinctive groove on one’s posterior.

Gunwales - The wood, aluminum or vinyl pieces running from bow to stern along the top of the hull. Also what novices typically grab if they don’t know how to brace. But please, pronounce the term “gunnels.”

Hip snap - Throwing the hips (and knees) in motion to roll a kayak. Also what oldschoolers hope doesn’t happen when they fall down on the portage trail. 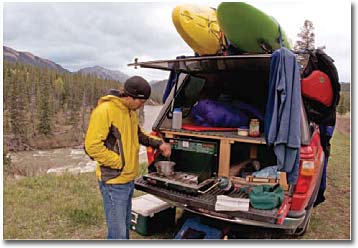 Hole (also hydraulic, keeper) - A spot where water tumbles over an obstacle and reverses course upon itself. See capsize, swim, throw rope.

Huck - The act of running a waterfall. “Way to huck carcass, brah. That was sick.”

Keel - A raised ridge that runs along the bottom of a boat from end to end to help tracking and add rigidity. When the boat goes sideways and this raised ridge catches a rock you will soon understand the origin of “keeled over.”

Limbo log - A fallen log spanning the river with enough room to scrunch down in the boat and limbo beneath. Arrggh, wait, maybe there isn’t enough roo-SPLASH!

Oil canning - This, surprisingly, has nothing to do with tearing the oil pan off a buddy’s car during shuttle. It describes the floor of a poorly constructed or flat-bottomed OC-1 or OC-2 when it bounces up and down in turbulent waters.

Outfitting - All the things you need to add to a canoe or kayak after you buy it.

Park & play - Parking close to a river feature and paddling a short distance to “play” on a wave or a hole with no shuttle required. Also what the local teenagers are doing in the backseat of their cars at the takeout after dark.

Pogies - Mittens that attach to the paddle shaft for cold weather paddling. Not to be confused with perogies, which can be treacherous since the mashed potato filling is slippery when applied to said paddle shaft.

Poling - Using a long wood or aluminum pole to push the boat upriver from a standing position. Also known as going up a creek without a paddle.

River-right - The right-hand side of the river when facing downstream. The opposite of river-left. Not to be confused with riverwrong, which is when you mistakenly leave the takeout vehicle in a different drainage basin.

Rocker - Longitudinal curvature in the bow and stern of a boat along the bottom of the hull. A heavily rockered boat will turn easily and track straight only with practice and good technique. Novice paddlers in heavily rockered boats are an endless source of entertainment.

Roll - Recovering from a capsize while remaining in the boat, requiring a coordinated hip snap and paddle stroke to bring the boat back upright. Kayakers often use a sweep roll. Most canoeists prefer a deli roll, with ham, pepper jack and spicy mustard.

Scouting - To disembark and look over a section of river before running it. Not to be confused with Boy Scouting, in which meritbadges are awarded for bashing aluminum canoes.

Shuttle - The thing besides paddling that needs to happen between put-in and takeout. This usually involves vehicles, but can sometimes involve hitchhiking and arguing about who left the keys back at the put-in.

Shuttle bunny - A non-paddling person who agrees to run shuttle. Shuttle bunnies who wait at the takeout with cold beer (without drinking it) are urban myths.

Skeg - An adjustable fin used to help some sea kayaks track straight. Remove the S and you have what kayaker’s hope shuttle bunnies bring to the takeout.

Strainer - Woody peril. Strainers are trees that have fallen into the river. Consider these hazardous to your health. Called a strainer because water will go thorough, but large particulate matter like you and your boat will not.

Sweeper - Trees or branches that overhang the river. Before they knock you out of the boat you’ll have a face full of spiders, hornet nests, assorted rusty fishhooks and something brown and disgusting, and you really don’t want to know what that was, do you? Don’t worry about it; you’re taking a bath in a second anyway.

Sweep stroke - Used to turn the boat opposite the stroke side by pulling the blade in an outreached arc from bow to stern. Not to be confused with the sweeper stroke, which is a modified breaststroke, used to extricate your entangled and exhausted body from in-water branches.

Swim - Exiting your craft into the water after a capsize.

Swim beer - The beverage a rescued swimmer customarily purchases for his rescuer, to show his gratitude and ensure future rescues.

Takeout - The place where you take your boat out of the water and put it back on the roof rack. Also the place where your paddling partner gets huffy and shouts, “No, I thought you had the car keys!”

Throw rope – aka throwbag. Floating rope in a throw-able bag used for rescue. Since it is difficult to throw a rope to yourself, you better hope your friends carry one too. For that reason they make ideal Christmas gifts for your paddling companions.

Thwart - A cross-brace between the sides of a canoe or the tubes of a raft.

Trip leader - A god-like creature who has volunteered to shoulder the burden of responsibility, make arrangements, coordinate meeting times and organize the shuttle. In homage to these great souls, trip members typically proffer an unending supply of alcohol and undying respect.

Tracking - The ability of a boat to hold a straight course due to its hull design.

Tumblehome - The cross-section shape of a hull that decreases in width from the waterline to the gunwales. Not to be confused with stumble home, which is what you do after the post-paddling libations have been consumed.

Volume - The total overall capacity of a hull The knob you don’t touch in the shuttle driver’s truck.

Wetsuit - A form-fitting neoprene suit that helps prevent hypothermia by trapping a thin layer of water between the neoprene and your skin. Or a thin layer of urine. Combine a colorful wetsuit with a matching sprayskirt and you too can live out a secret fantasy life as an incontinent transvestite superhero.

Yard sale - The appearance of the downstream eddies when your gear floats away after a capsize. See reason to write your name on your equipment.

Yoke - A scalloped amidships thwart that rests on your shoulders when portaging a canoe.

Z-drag - Nothing to do with inhaling a handrolled Zig Zag, it’s a rescue rope system using mechanical advantage to free a pinned boat.